A downloadable demo for Windows, macOS, and Linux

A single player experience where you try to complete as many orders as you can in a kitchen that only you are to blame for. After finishing the short tutorial you'll be able to design your own kitchen and then do your best to cook and deliver food orders before they expire.

Controls are included in the game; you can use WASD, arrow keys, or an xbox 360 controller.

This is based off a pre-alpha I teased 2 months ago. Changes since then:

Any ideas, bug reports, or suggested improvements are welcome. If anything felt bad or kept slowing you down let me know! I'd love to make the game as smooth and intuitive as possible.

Download for your OS, extract somewhere, run the game :)

Hi, and thanks for this game!
As a first feedback on the latest published version (v0.11 - Linux), I'd like to suggest the following implementations:

- the ability to select the element(s) type to pick up when more types are placed on a table at the same time;

- the ability to select the element(s) type to place on a table when more types are helded in your hands at the same time;

- the ability to pick up the food (when realistically possible) that have been placed on a plate/dish/pad or put in a pot or bowl (without this feature, is not possible to "separate" a plate/bowl etc... from a cooked ingredient, to be saved for other uses, without using the trashcan and so wasting a still usefull food);

- allow stacking more element of the same type on the same table;

- add a shortcut to put away all "raw" food in a food crate and all the dishes in the dishes storage that you are helding in your hands (also the same shortcut could be used to pick up all elements from a table at once);

- the element type preview list that shows up next to a crate or a table could also visualize more than 3 elements at the same time when there are many element types available to pick up/put away;

As a [Bug Report] instead:

- after the initial tutorial, when kitchen is still closed and at least a crate and table has been placed, by piking up whichever element from a crate and putting it on a table before opening the kitchen, if you then enter kitchen-layout-desing mode, all of those elements appear still placed on the tables and, after exiting this game-mode, from now on the spacebar-key starts acting as a shortcut to enter kitchen-layout-desing mode directly so that game becomes unplayble;

- the spacebar key functionality changes also in other ways unpredictably during the game (the previous spacebar key bug is the only one I was able to reproduce);

- food crates don't contain any oil bottle, that is required in one of the cooking recipes (Hasbrowns);

- take a look at the office door animations because walking through that door some times it rotates along the horizontal upper border of the door frame instead of rotate along the lateral vertical ones;

- audio settings are resetted at the end of the intro. tutorial (both when it has been completed or interrupted by pressing "F1");

- the key names used to switch the element type to pick up from a box or crate are uptdated only in the side notes sheet but not in the box/crate contents list UI element;

Thanks for your time and for your work! 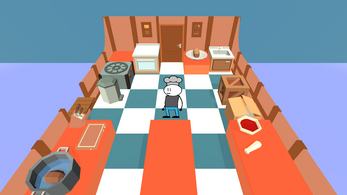 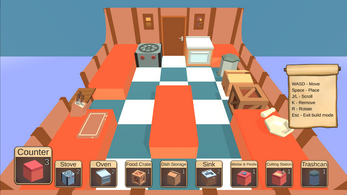 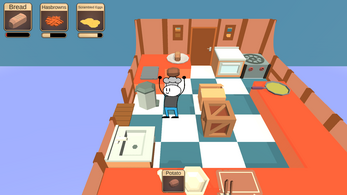 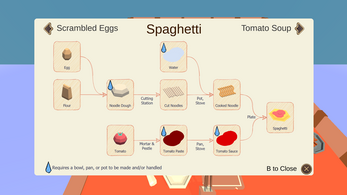